Well, I've looked at the rom in xvi32, the hex editor I have, and notepad++, in both, where you'd expect it to say "ZELDA MASTER QUEST", it instead says "EZDL AAMTSREQ EUTS" (all minus the quotes of course.) Also, by plugin, you mean Mudlord's Rice Video Build 6.1.4 right?
M

Ahh, that's your problem, you need to be using the latest Glide64 plugin. Rice video is good for dumping, but it doesn't load packs well, textures can appear blurry and I get graphical glitches just testing with it. http://www.emutalk.net/threads/54874-Glide64-Final

And as to editing the rom, I have no idea, I'd make a backup first, then change what you think will work. Or alternatively I've seen some mass renaming programs on emulation forums, but never tried them myself.
S

Well, I found a Bulk Renaming Utility (actual name) for file renaming. The problem now is interesting. Rice loads the HD textures just fine, Glide64 doesn't seem to want to. Is there something I can do with the textures in Rice to get Glide to work?
V

Or you could just byteswap the ROM. That would be easier

Ok, an update, Rice may load the textures, but from some tests, there are still some graphical issues. I could avoid those with Glide, but then I just get the stock textures. Also, and Idk if I can post this here, but I have someone else's texture pack for Majora's Mask, it works fine, but it really lowers the framerate. That one I am able to use Glide on. And I have a decent computer so I don't think it's that.
M

So umm.. I've gotten a little distracted from doing the backgrounds, and I've been texturing all over the place. I've redone the Master Sword slightly, so the cross guard is now coloured similarly to the handle. In layman's terms, the crossguard is blue now. It's not higher resolution though, I just reworked the texture we already had. Oh and I also fixed it up so that the sword is textured whilst in the pedestal as well!

I've also finished the Temple of Time. That means the stone tablets representing the seven sages, as well as the Light Sage emblem on the raised part near the entrance. Now because I've retextured these, that means I have high quality versions of the medallion designs, so should I just go ahead and redo the medallions whilst I'm at it or not?
EDIT: Okay I tested out a new medallion and it turns out if you up the size they get cropped to fit in the pause menu, so I shan't be doing them!
The light sage emblem by the entrance (it's an all white texture that looks like the light medallion) isn't working. It appears to work by darkening the texture underneath it on any blank pixels, and because of the way I made it, it doesn't work at all, so the temple of time is missing that texture
Last edited: Feb 10, 2015
M

So I'm still working away (seriously I feel like this thread has become my personal diary of late). I've realised the light sage symbol I mentioned for the temple of time isn't the only texture that has this behaviour, there's one at each temple on a stone triforce. I'm yet to figure out how exactly they work though.

Here's a picture of the last ToT tablets I made, and if you look at the sword you'll notice the new crossguard texture too. 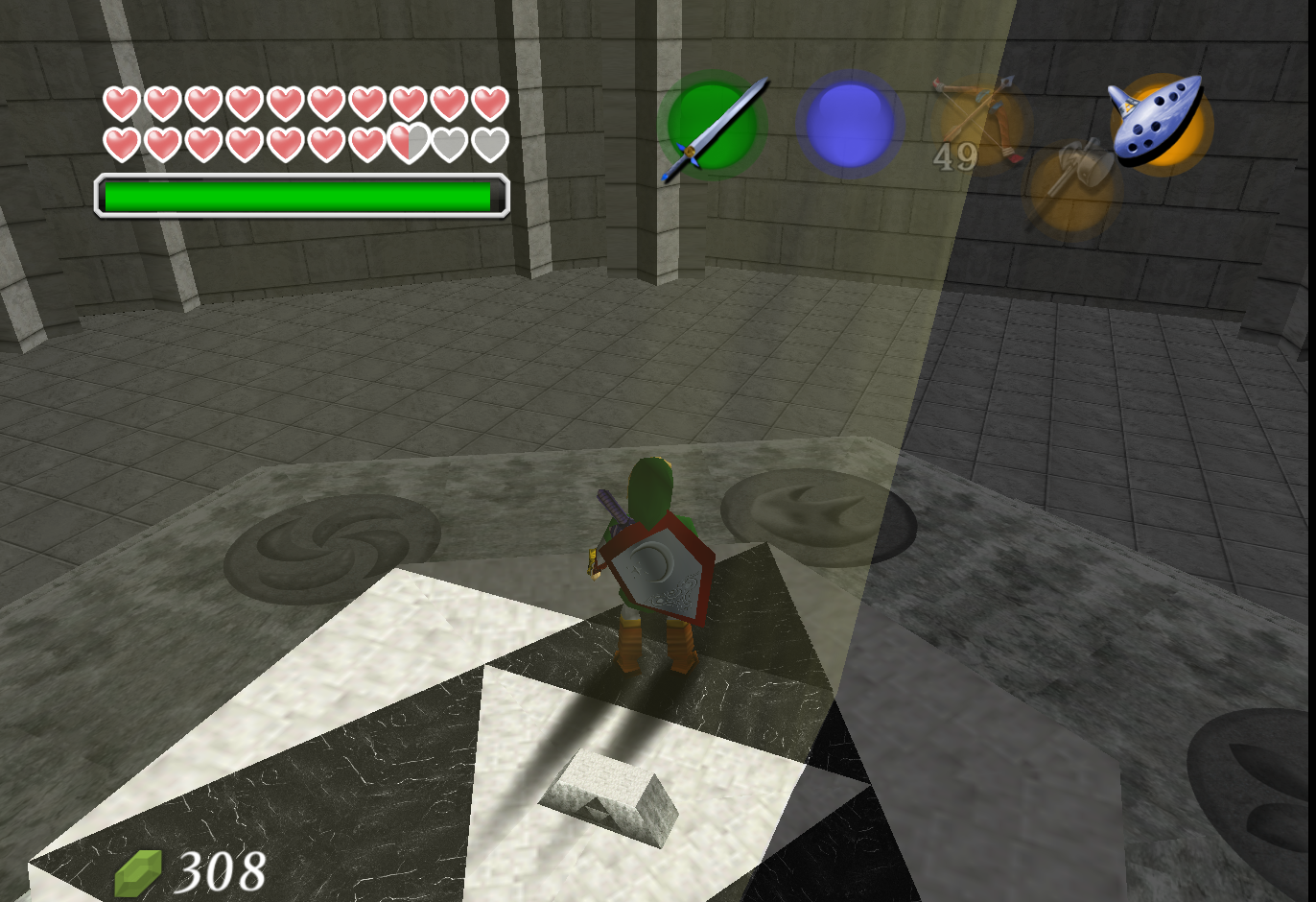 And here's an issue I found. At the entrance to the lost woods the inside of the log is textured, but inside the woods they are not. I can't locate the texture either so I figured I'd let you know. 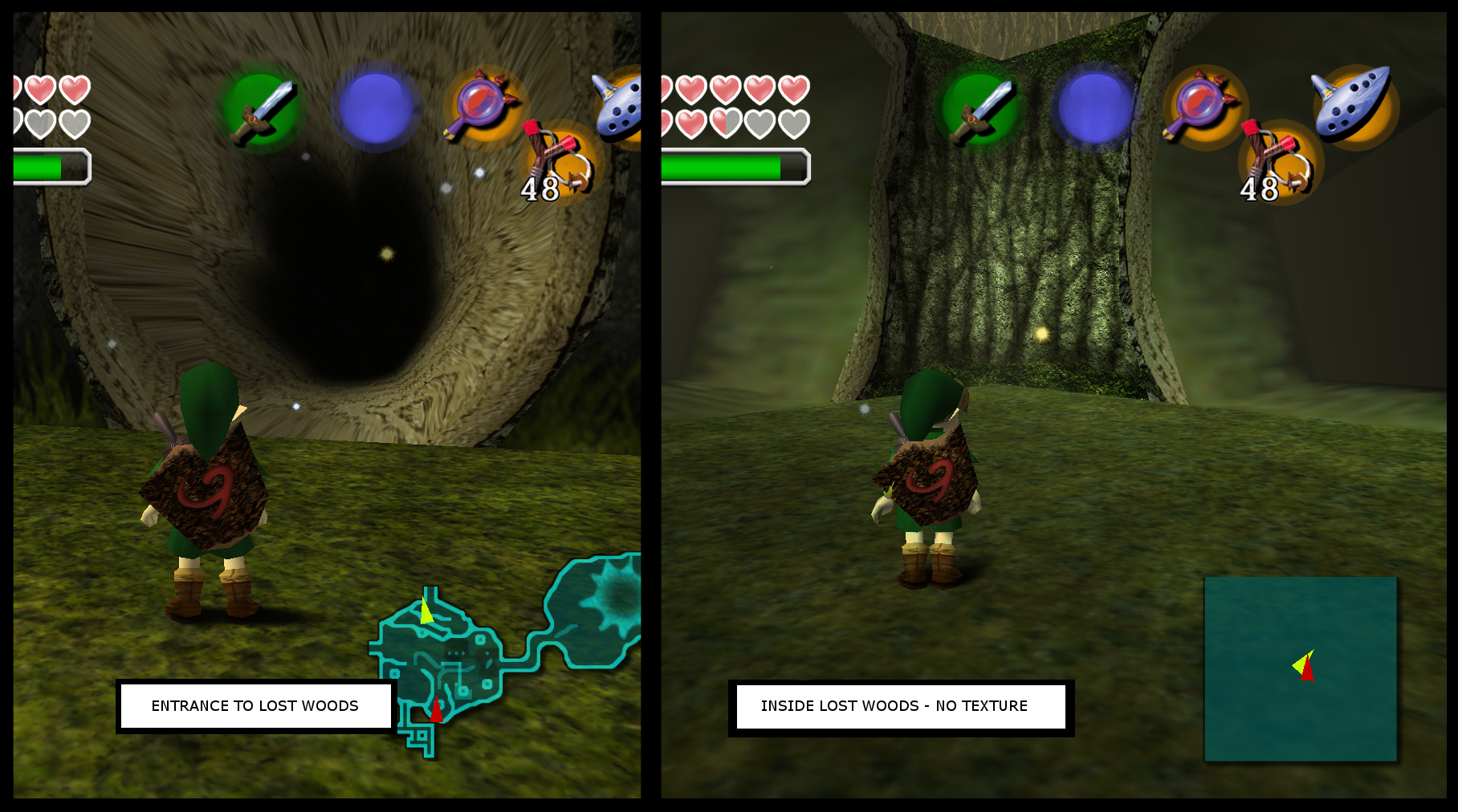 Oh and one last thing, I've gathered up all the textures I created and put them into a separate folder with the same structure, so when you need them you'll be able to just drag and drop them.
F

What plugin are you using to dump/replace the textures?
M

Fanatic 64 said:
What plugin are you using to dump/replace the textures?
Click to expand...

MikeZilla said:
Ahh, that's your problem, you need to be using the latest Glide64 plugin. Rice video is good for dumping, but it doesn't load packs well, textures can appear blurry and I get graphical glitches just testing with it. http://www.emutalk.net/threads/54874-Glide64-Final
Click to expand...

Why isn't the OoT 3D Link already put into this? I've been trying to figure this out.
F

Listen said:
Why isn't the OoT 3D Link already put into this? I've been trying to figure this out.
Click to expand...

Because it's a 3D model, not a texture.
L

So, how do I apply what I have? This is what it looks like in the Windows folder. 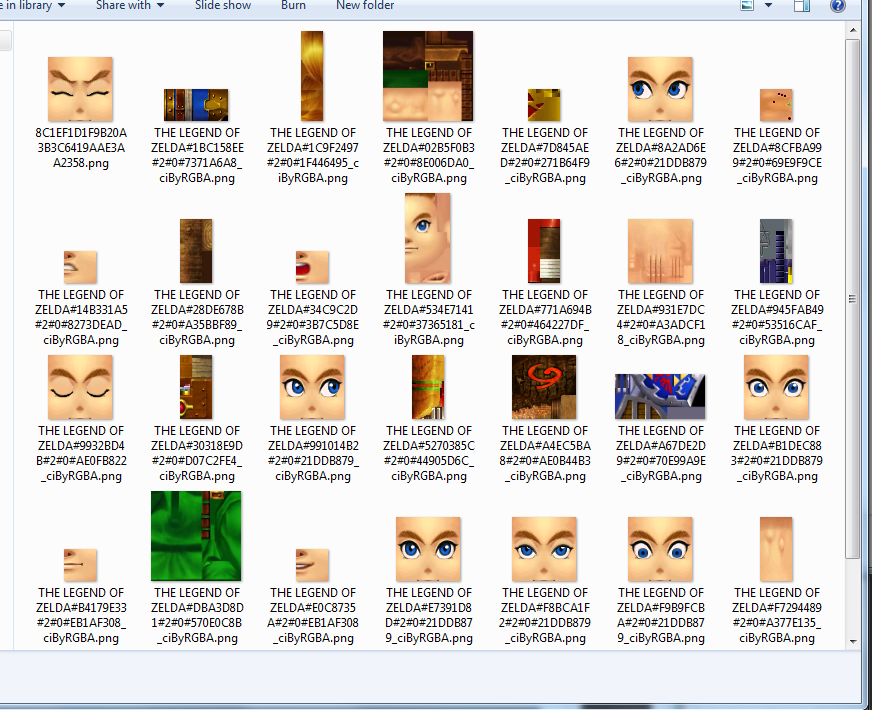 This saddens me.
OP

Moderator
Wow sounds like you have been busy MikeZilla, keep up the good work!! I'm hoping to return to textiring sometime soon, been busy with personal matters.
Its great to see someone be working on this pack again and your work seems rather good from a quick look over. Will go over your posts better when I have some more free time

[MENTION=112600]Listen[/MENTION], I dont know what you mean
Edit: Nevermind I see MikeZilla answered your question
Edit2:MikeZilla is right, this is a community made texture pack, using textures from OOT 3D would put us directly in firing line of Nintendos lawyers.
Also to note that the textures made for this texture pack are of very high standard of quality.
Last edited: Feb 23, 2015
M

Thank you DD! Here's a folder of everything I've done as of yet:
http://www.mediafire.com/download/bmyo4oqsxtj7m23/THE_LEGEND_OF_ZELDA_-_MikeZilla's_contributions.7z

And whilst I'm at it, here's my progress on Link's House:

It's not quite finished yet, a few more odds and ends and a floor texture (I have a walls texture but I'm hiding for the sake of the image)
I really don't want to make that floor texture
But on the other hand, leather buckets! I didn't know they existed until I was researching for this
EDIT2: I stopped being a wuss and just made the floor, I hope it works as intended

Just the sink and a bit more colour work and shading, then the arduous task of saving it as the separate images *shudders*

MikeZilla said:
Just the sink and a bit more colour work and shading, then the arduous task of saving it as the separate images *shudders*
Click to expand...

No need to be afraid of the jigsaw part of your work. For Rice you can use the whole image and for the tiles dumped by Glide64 you can HiRes-Easer let do this tedious work.

Simply:
Done in a matter of minutes
M

Rice only makes large image for static backgrounds, not the panoramics
I've got it all ordered with the correct filenames as layers, so it's just a matter of clicking the same five buttons over and over for about ten minutes, so I won't die or anything... I hope
C