The fonts are for the US version.
I also included variations for some files and they're archived so feel free to unpack them and see if you like them.
If you wanna make a Dolphin version of this project for SF64 Virtual Console and/or continue it... feel free to do so, you have my blessing!

I made my pack as an addon to THIS amazing Starfox 64 texture pack by unaidedcoder that contains levels and enemies (i didint retexture any of those things). I recommend using it in addition to my pack.

The LETE from Mission Complete has some issues, i tried debugging for a few hours but couldn't get it fixed so "i admit defeat". If anyone's up for fixing it... feel free to do so . The font used is Bank Gothic MD with default spacing. 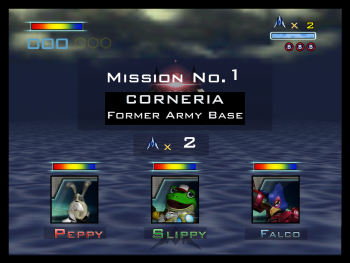 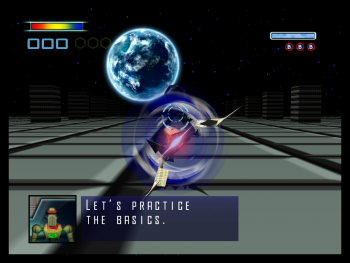 I'm pretty sure you should focus on textures of something you alway see, such as number of Smart Bombs and Arwings on upper right of the screen.

Thanks for your feedback.

There is a great texture pack by unaidedcoder that has some really nice icons and much more (levels, bosses, etc). I recommend using those since my intention (as with the turok 2 fonts) was to retexture the few things missing in that pack (fonts, particles, the mission name)... even though i remade some of the textures already in that pack in the process (i had to since i tried to do everything at least 8 times the original size).

I shall release icons for bombs and arwings/bluemarine/landmaster lives when i will be satisfied with the result (i tested some but i don't like the way they turned out).

I also made a 2048x2048 sector Z made of flames that turned out ok standalone but in game it looks just horrible and i tried various tweaks.. so i gave up on redoing any of the sectors.

Retexturing the spinning golden rings is also something i had planned from the beginning but i haven't decided if the ring should be hexagonal (like in the n64 game), round like in SFA or the weird hexagonal shape in SF64 3D. There's also the landmaster propulsion that needs some work done...

UPDATE 1:
Arwing shadow (precise shape of the n64 Arwing model)
HUD icons: Smart Bombs, Remaining Lives (Arwing, Landmaster, Blumarine)
There are two color variations for each icon's border: black, respectively white. The original textures had black borders but I find the white borders to fit the smart bombs better since they stand out and you can see them with the corner of your eye.
Thanks Lucario for pointing put the need for these icons. The spinning gold rings animation should be available soon.

UPDATE 2:
Gold Rings
There are 2 variations i made for the gold rings animation:
- large 512x512 pictures
- small 128x128 pictures with glow around the rings, for a smoother appearance since downsizing large textures makes them look too sharp (when no filter's being used). Since the glow is too strong they rings seem a bit cartoony but so does the rest of the GUI, if you don't like it you can use the large 512px ones (they lack borders or glow) to make your own downsized version.

razius - this is EXCELLENT work! Hopefully I'll be able to give you some more helpful constructive feedback after I get more playtime in, but I just wanted to say that I am impressed!
OP

Moderator
Great stuff!
I really like the welcome screen, would you donate it to the community for use in other games?

Does this update include your previous work, or do users have to compile it from the updates?

Whats going on with the text format?

Every texture in any of my packs can be used by anyone (altered or as is) for other HD projects. And i think i have about 10 different Mario fonts spread across all the texture packs i released that people can use out of the box.

Wow that font sure looks creepy. My bad... the file you downloaded was 70MB instead of 160MB. Fixed the file, and edited the link in the OP. If the problem persist then i have no idea what's the problem. My fonts are loading properly...
Last edited: Jan 11, 2015

Moderator
Cool, your work is amazing.

The Problem was that the textures were incorrectly sized this issues is solved by enabling HresAltCRC.

If the 160MB pack (v1.2) contains all of the work than I'll remove the former archives.
This pack also needs a lot of tweaking there seem to be other errors including incorrect file sizes, duplicate files, and zipped archives within the pack.
Last edited: Jan 11, 2015
OP

1. Duplicates: fixed.
2. Archives: intended as such. Each archive in a folder contains variations of the files inside a subfolder (if a subfolder is called "Are you sure glow" then the archive called "Are you sure no glow" contains same files but without the glow). Some people might like the fonts without the glow so they just have to replace the files in the folder with the non glowing ones in one of the archives.

Please inform me when the next update is available.
S