The first thing to note about American Wasteland is the massively addictive story mode, which alone can take many weeks to complete fully. Considering the fairly linear nature of skating games, American Wasteland seems to pull off an effective storyline effortlessly – finding things for the user to grind on, spin around, or flip over to trigger a certain event.

When you’ve finished with the story mode, there is the more traditional classic mode available to keep you entertained. You are presented with one of many different skate parks in which to show-off your tricks and skills. Combo’s, big-tricks, and high-scores are the aim of the game here – with more skate parks and characters available to the best skaters.

Graphically, American Wasteland is nothing spectacular. It looks a lot better than its original Xbox cousin, but aside from a few nice looking puddles here and there, it hardly pushes the superior Xbox 360 to its boundaries. The in-game sounds and music tracks are highly appropriate - top rock band Green Day amongst the line-up of stars included.

If you’re bored of skating by yourself, you can connect to Xbox Live and play against other budding pro’s around the world. There are a wealth of online variations available, from plain skating to crazy flame-thrower skater death matches!

American Wasteland is one of the greatest pick-up-and-play games that you’ll ever experience – and for this reason it comes highly recommended. There are enough game modes to keep you playing for a lengthy time – and long after you’ve completed the game you’ll still find yourself picking up the control pad for just one more go. 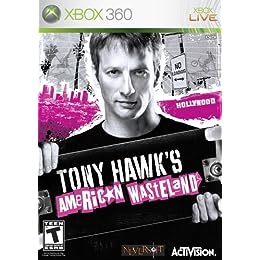