Hey gang, it’s time for yet another a long and possibly cynical ramble about one more game that yours truly would like to bring to your attention. Truth to be told this one isn’t exactly new to us and I’ve basically been meaning to cook up this review for a good 3 months, however my finals and an unhealthy habit of staying out and drinking too much got in the way so far. In fact my finals in particular kept me so busy that I even forgot to pay the half-yearly fee for my car insurance but that’s another thing. Anyway. What I present to you now is another helping of my thoughts considering what I think was one of the few major titles worth mentioning for the cube in 2004:

You’ll be dealing with the usual review layout I’ve been using here. Each aspect is topped off with the (unscientifically developed) score of x/5.

Paper Mario – The Thousand Year Door (in the following referred to as “Paper Mario 2”) is the third part of a remarkable RPG series which started with Super Mario RPG (USA and Japan only), which was released just about when the SNES was about to succeeded by the N64 in 1996. In 2001 there was Paper Mario, strictly speaking the sequel to Super Mario RPG but officially the beginning of a new series. Paper Mario 2 as it’s direct sequel picks up the same characteristics.

Developed by Intelligent Systems and published by Nintendo of course this thing is a usual Mario story. Princess gets kidnapped, Mario goes to rescue her and all that. It’s basically the same old yadda which keeps me thinking why they even let the damn princess run free in the street anymore. Then again I wouldn’t wanna be the one to be responsible for the sexual dissatisfaction of a young woman surrounded solely by toads, and Nintendo is with me obviously. So far so disappointing but it gets better.

Paper Mario 2 starts out in Rougetown, a rotten town at a harbor with, well.. lots of rouges (god, that was cheap wordplay) where Peach finds a magical map to a treasure and of course wants Mario to help her find it. However before Mario arrives, Peach gets kidnapped however and Mario has two jobs now: Find princess, get treasure. 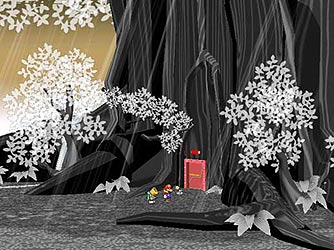 As stated, Paper Mario is an RPG and even better, the only worthwile RPG on the cube aside from Final Fantasy: Crystal Chronicles, that I am aware of. With the genre in mind I will first focus on the battle system, which is also a highlight of the game.

As usual, Paper Mario features turn based battles against multiple enemies against Mario and one sidekick at a time (you will have a whole baseball team of those guys after you’re about half through the game), which hasn’t changed compared to part 1. It’s still somewhat unfortunate considering Mario RPG featured more players at a time. You attack enemies by using either your jump ability or items. Later in the game you also learn to use a hammer and star powers (wheeee!) which all work differently on different enemies. Consequently, jumping on a gumba with a spike on the head is a bad idea. On the other hand it helps to jump on a koopa because he will fall on his shell and be unable to move for a round. Pressing the right button at the right time enhances the damage inflicted upon them and doing the same when attacked blocks the hit and decreases the damage you take. Badges you collect will enable special abilities or increase health. Also there are still three kinds of energy types which are Health, Flower and Badge Points. Flower points being used to execute special attacks.

So far for veterans of Paper Mario that is no news, the real innovation is actually the audience, yes the audience – a whole herd of clapping, screaming or booing ingame characters (they actually change as you advance in the game) that will reward you if you fight nicely. The number on your left side always shows how many people are watching you. Sometimes they even get pissed and throw shit at you. This causes fights in Paper Mario 2 to be a whole lot more entertaining than previously.

Unfortunately however, Paper Mario 2 still doesn’t quite take full advantage of the possibilities of an RPG yet. For example the sidekicks finally have their own energy scale but still aren’t earning experience points to get level upgrades but instead get a maximum of 2 levels up by finding shines and trading them in. It appears funny that in Super Mario RPG this feature existed already only to be abandoned as the series hit the N64.

In terms of story it’s fortunate to see that the developers wrote an equally funny script again this time which is often marked by self-irony and poking fun at common Nintendo things. It’s pretty easy to tell that Paper Mario doesn’t take itself too seriously and neither should the player. A lot of the dialog I have encountered in the game was simply hilarious. Along with this, the storyline is quite absurd this time and the overworld is full of pretty funky characters.

The level design is great. Both in terms of variety of the scenery as well as tasks to perform. You will encounter a dragon castle, a haunted house, a pirate cave and even the inside of a tree on your journey through the game which alone makes it worth playing as just seeing the new theme is rewarding.

As for opponents we have the usual palette of Nintendo foes here, which of course means gumas, koopas, bomb-ombs and most of the guys you possibly fought in Paper Mario are back as well. The difficulty is remarkably balanced: In the beginning usually it’s your opponents who have a slight advantage over you, but with growing experience the tables turn after a while. Still it’s by no means a hard game. I am about 2/3 through and never was in real danger of dying yet. The end bosses are sweet and always very different from each other but also no real match. 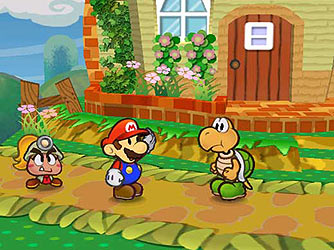 When I first posted screenshots of Paper Mario 2 before it was released, a board member mentioned that they looked like the original Paper Mario with FSAA, which isn’t that far off.
As usual for the series, you control a 2-dimensional cartoon Mario in a 3-dimensional world. The characters are not only cutely drawn but also well animated, while they still blend in with the equally satisfying overworld.
You won’t be seeing a lot of breathtaking graphics effects obviously, which is just fine here.
Nonetheless, Paper Mario’s world shows great detail and doesn’t leave a lot to complain about, in fact I almost have to feel bad about not handing a perfect score here...well, almost. Giving a cartoony game a perfect graphics score would be sure to ruin the rest of my credibility after all.

Oh he’s gonna slam the sound now like he always does, won’t he? Well, actually not. To be blunt, it’s awesome. Every scenery has its own theme and it usually fits perfectly. You’ll always know exactly if you are in a dark forest, a haunted house or a village up on the hills where the sun always shines. During battles the audience cheers and in a critical situation a more dramatic tune starts playing. To top it off, Paper Mario features a huge (often funny) amount of SFX at all times. Sadly though, there still is no speech which leaves you with reading everything as usual which is still surprising to me as speech has been around on the PC in adventure games since 10 fucking years, so maybe it’s not too much to ask from Nintendo to just get with the time soon. But I’m being picky.

Unfortunately no multiplayer mode is available but let’s face it, Paper Mario wasn’t designed to be a multiplayer game as it follows a relatively linear path and compared to other RPGs its world is extremely small.
Also, sidekicks are not a vital part of the overworld gameplay as their only use is to be exploited of their special abilities, such as getting an item in far distance with kooper’s shell. The only real role of a 2nd player would therefore be in battle. No score here. 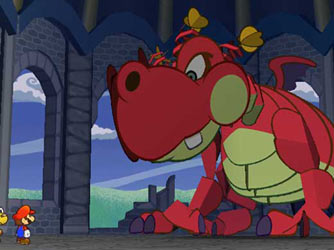 Again Intelligent Systems managed to put in a lot of side quests to discover which alone make exploring the world very entertaining. Generally there is something to find in every corner. I have played about 28 hours and still have quite a few things on my list that don’t necessarily need to be done but CAN be done, which is to ensure that the game will last even after the story is finished. No doubt though that Paper Mario 2 can’t feature as much debt as, say Zelda which is also due to the limited size of the overworld.

Paper Mario 2 is one of my personal highlights of 2004 and a must-have title for the GameCube. Part One was an amazing game and Intelligent Systems has managed to improve their working concept even more, making the game way more than just a sequel but a unique experience. You may find it a bit too easy and limited compared to other RPGs though, but don’t let that stop you from playing it if you haven’t already.