Yes kids, it's yet another infamous Emu64-Review by yours truly. Since it seemed like at some of you enjoyed my rant about F-Zero GX a couple of months back you now get what you deserve and I`m here to bring you another chunk of my mind concerning another game. Sit back, grab a beer and read what follows...

There's something about Animal Crossing (occasionally further refered to as "'Crossing", or "AC" by the lazy reviewer bitch) that makes it somewhat naturally outstanding in the huge amount of 1st party titles that have been released for the little multi-colored one since its release a few years back. By outstanding I am not refering to the genre, because there will be more on that later, what I want to bring to your attention is more the interesting release policy that Nintendo applied to this one. Originally released in Japan for the N64 and later as a practically unchanged port for the Cube and winning some genre awards in the USA in 2003 this interesting piece of software has finally made its way into pitiful PAL-consoles to now be available for everyone who doesn`t own a Freeloader or was unwilling to import it. The fact that it now has taken a place in my gaming collection seems like reason enough to write a review about it.

One of the most frequently asked questions about this game is probably something along the lines of "What the hell is this shit?". Generally AC could be described as a "Life Simulator", much along the lines of The Sims with the slight difference that you don`t indirectly take action but directly control your character. Crossing is all about a mislead young person without money or brain cells (e.g. the potential player) moving to a new town, striving to find freedom, love and a home to stay. Those of you who played Harvest Moon will probably have the general idea by now.

Remarkably also, that 'Crossing comes bundled with a memory card 59. The reason becomes plain obvious after finding out that the game uses the massive amount of 57 blocks of space...sign for complexity? Yesh. 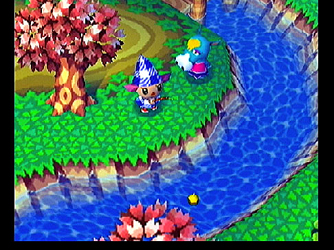 Before you actually get started in Animal Crossing, you will need to get past the intro sequence which takes place on the train to your new home. Probably the first thing you will notice is that a huge part of Crossing is dialog which can become very lengthy at times and provides a test to your attention span. Arriving at your town, you have been directed to Nook, the local shop keeper who just happens to be the monopolistic holder of all business activites around the town and quickly becomes your address to buy a home. Now since Animal Crossing is just like life of course money is a no-no so your first task is to do work in a shop to pay off your debt.

As a side note maybe it`s worth mentioning that all characters in Animal crossing are ... well, animals. No shit, Holmes. Along your way in the game you will meet birds, racoons, bears, lions and whatnot who all have different and unique characters. The people in your town will get moody and bitchy at times, other times they will be in a happy-go-lucky mood. You can get mini "quests" by talking to them and earning items or money through small deliveries. Of course the town has quite alot to offer aside from citizens.

You will find a post office, so you can receive letters from your mum (not a joke) or send them to your animal friends, keyboard advised here. From time to time you will find new items in Nook`s shop, like a shovel for example. Now One of the interesting things about Animal Crossing is that all of the items actually have multiple and interesting uses which sometimes aren't obvious at first. Example: The shovel enables you to dig up shit from inside the ground such as fossils and at the same time you can bury stuff like fruits in the ground to grow a tree - yes it`s just like life. Almost everything you find around the city you can sell at the shop, whether that be bugs, fish (hook required), or an umbrella that someone gave you. Generally about everything can be put to some use.

While you are at it, decorate your house with a carpet and furniture or go to the sewing shop to create that special "red moons with pink hearts" dress you always wanted to have. Maybe being a bit ridiculous in description is the right way here because `Crossing actually offers a great deal of freedom to the player.

Another interesting feature worth mentioning is the real time clock which controls the game. If you play in the evening your world will be dark and people go to sleep at some point, in summer you get sunshine and rainbows, in winter everything is covered in (Walt Disney would be proud) postcard-ish snow.

Putting a rating on the gameplay part is extremely hard for Crossing because the genre plainly suggest a love it or leave it-game. Generally what annoyed me is the extreme low pace. Walking through the woods to get from one point to another usually leaves you finding a fish to catch or just chopping down a tree for the hell of it but it can also be a pain in the ass. Then again, if action is your thing Animal Crossing isn`t your game anyway. On another note, chores that can be done for other villagers are jobs along the lines of taking item A to person B which gets old really soon. It`s those kind of repetitive tasks that tend to kill motivation after a while. What keeps you going is finding new stuff.

One of the major problems of Animal Crossing is undoubtly the graphics which look just like on the N64 original which means not only washed out textures but also the same old effects that made our jaws drop maybe 6 or 7 years ago ("Dude, Alpha Blending!"). The other thing is that the game is, well, cute. I`ve always been an amused observer of the lengthy forum discussions concerning kids age 12-16 who feel they are being threatened in their masculinity by playing a game that doesn`t make their parents scream for the ESRB to help them. Much like the Mario series and all Zeldas (except the N64 versions), Crossing is a family friendly game which features some downright adorable animations. All in all the old school-ish look doesn`t disturb the gaming a bit, because the game mainly lives on its gameplay while graphics aren`t the important factor. 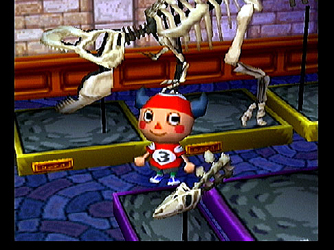 I seem to be cursed with reviewing games that don`t have a lot to offer in the sound department, either that or I`m just a picky bitch. In any case Animal Crossing features the usual All-Nintendo background music that have enjoyed since early Gameboy days. The Animals make undefinable sounds ressembling the words, though you can turn that off too.

By definition, Animal Crossing is mainly a single player game which consequently leaves it with a different mode of multi-player. It is possible for up to 4 people (with 4 memory cards) to set up camp in a city and further than that the game allows a player to "travel" to the city on another memory card and spread joy. I must admit I don't have the possibility to make use of this questionable multiplayer feature because of obvious reasons. So for the sake of objectivity I refrain from rating this feature.

This is what Animal Crossing is all about. The game continously offers new things to find in your town, that keep you going with it. Alone finding a new item can provide an hour of joy while finding out where you can use it (there was also disappointment on my part when I found out that I couldn`t use the axe on villagers). A simple activity like fishing in different places and finding different kinds of fish that bring different prices in the store will get you through a lot of gaming time. Generally, Animal Crossing usually brings something new when you don`t really expect it. From time to time, new people will show up in town who offer interesting new stuff, it`s almost a neverending story.

Animal Crossing is for right hearted. Either you love the genre and you have a thing for lengthy conversations and spending time on simple activities or you prefer the fast-paced action of an action-based game. In the second case of course, Animal Crossing isn`t for you. In the first case however you will likely have quite a while of fun entertainment while discovering more and more things to add to your 57 blocks save state. If you care about graphics, it isn`t for you. If you care about finger breaking combos, it isn`t for you. But if nothing else, `Crossing is remarkable and worth a look just to get the idea of the game because it`s so unique ... and maybe you`ll even stick to it.

So much for my 2nd review. Sarcasm is up by 15%, beer is down by 40%, sleep is newly introduced on the market. If you got this far and actually read all this, congratulations and please post a comment. Over and out. :watsup:
Last edited: Oct 15, 2004

I'm thinking on buying these great stuff of software for my cube, so thanks, that you review this game!!!

Excellent review. This game was in my GCN for over six months nonstop when it was first released. I'm glad I've moved on from Animal Crossing to Final Fantasy XI in terms of "Games that take over my life". Both are addicting as hell but I can be a Red Mage in FFXI.
M

I should also point out that earlier this year I released a trade code generator that allows you to generate a universal code, player-to-player trade code, or NES contest code for (almost) any item (with some caveats) in the game. Unfortunately, Nintendo specifically blocked Legend of Zelda, Super Mario Bros., Ice Climber, and Mario Bros., from being obtainable in any way, shape or form via a trade code, but that's the way life goes. You can grab it right here: http://www.zophar.net/personal/mooglyguy/codegen.html

I played the game some time ago. One recommendation: Don't play more than an hour daily. It will kill your desire to play it.

I'm thinking about buying it again. I have too many Nintendo Power Magazines with AC codes to not use them.